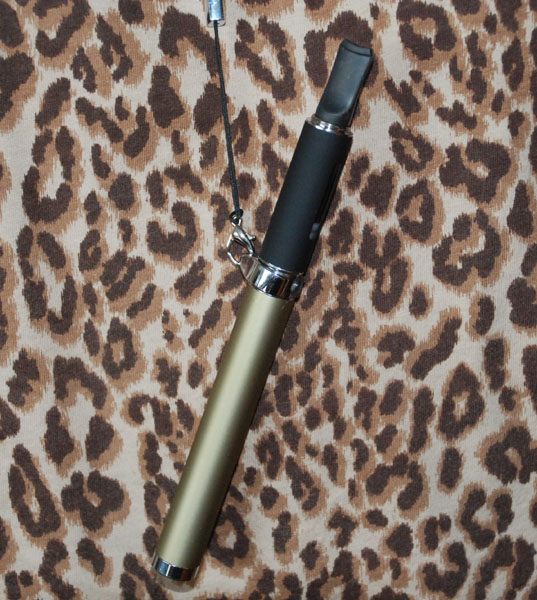 This is actually round two of our portable E-Cigarette tests, with profoundly different results.  In round one, we tested an E-Series e-cigarette using glycerin tinctures and subsequently with cannabis acetate oil.

Our E-Series was of insufficient watts to vaporize oil directly, and required a carrier menstruum like glycerin or propylene glycol.  We conducted our experiments using glycerin, which we directly extracted the cannabinoids with, as we were never able to directly mix glycerin and cannabis oil concentrates.

That limited the potency that we were able to achieve, and while the E-Series produced medicinal effect, it was not impressive, so we switched to cannabis acetate, suspended in enough ethanol to allow saturating the wick, which we then allowed to flash off. 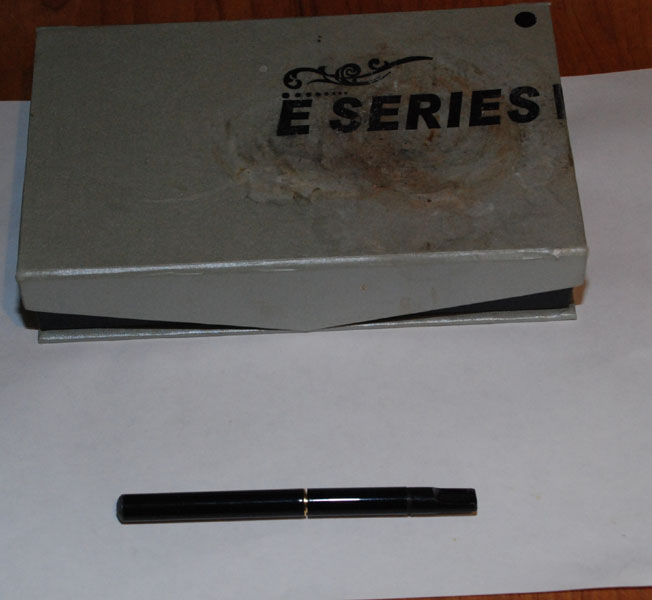 Test panel members frequently used the word, "Wow" to describe their experience, because although the cannabis acetate is probably no more potent than the oil it was made from, it passes the blood brain barrier so much more quickly, that it just arrives, instead of the effects coming on.

We were pretty happy with the medicinal effects produced by the cannabis acetate, but as not many folks can produce it or lay hands on any, we decided to put the project on hold, until someone came up with something with enough wattage to vaporize straight cannabis oil extracts, or we had more time to devote to developing our own.

Recently we had a couple of cheeep Chinese battery packs donated to us in a joint R&D program, along with a pile of different carts to try out, and have been having our way with them.  Hee, hee, hee.........

We didn't do deep supplier research, but we were able to get inexpensive mix and match components on line at:

There was a wide selection, but the pens we selected were under $30 each and the 510 carts that we chose were only $1.60 apiece, plus he picked up some other carts cheeeep, which looked interesting.

There were a number of other 510 cart manufacturers available, but at this point are more focused on process than who makes the best cart.

The pens were labeled with different names, though they appeared identical.  The one that I ended up with is labeled Tornado-C and Joytech.  According to my meter, it is putting out 3.8 volts.

Let me start by announcing that there is no question that they have developed a system that is hot enough to vaporize straight oil, and deliver a full hit, so now we can move on to the nuances!!!

Thank ya'll folks who moved the ball this far and may the Great Spirit bless you!

We started our tests using a KR-510 stainless cartridge @ 1.9/2 ohm (brand ?) and decarboxylated Absolute Amber oil, as it was easiest to load by heating it up and injecting it into the carts with a glass syringe.

Alas, while the device delivered nice effective hits, not only did some of our carts leak out the bottom, but the oil was of low enough viscosity, that if you laid the pen down, the oil would eventually slump and run out all by itself.

What seemed to work best in the 510 carts was oil that was still in its carboxylic acid form and stiff at room temperature.

We started with some thin film vacuum purged Absolute Amber, which had the feel of dry lacquer to the touch, and chipped when we tried to scrape it from the Petri dishes. 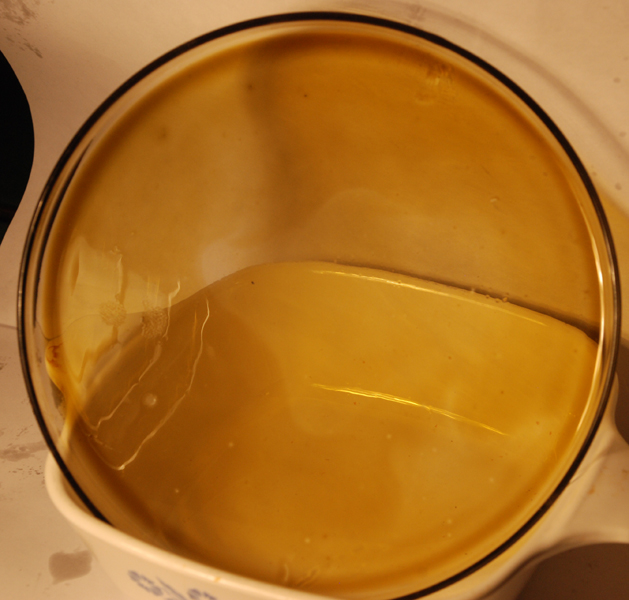 We warmed it over simmering hot water to soften it enough to scrape, and after wiping it off the razor blade with a .045" diameter 17-4PH stainless steel weld wire, we inserted the wire in the carts and heated it until the oil dropped off, using a small Bernzomatic pencil torch and then gently heated the cart to get it to evenly fill.

When it cooled down it was of a hard shatter consistency and the pen could be laid on its side with impunity. 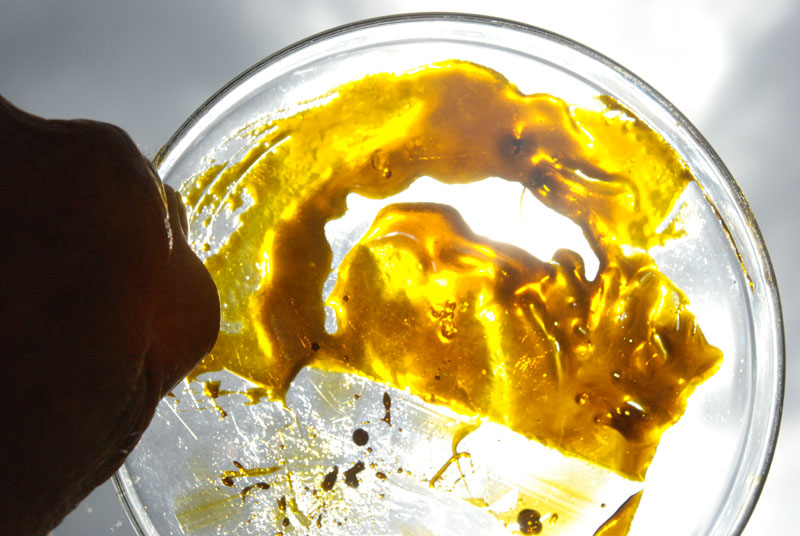 We subsequently tested some C-99 vacuum purged raw BHO oleoresin extract, which brings us to the subject of taste and of wax.

The pen vaporizers as tested deliver a full potent hit, but most of the taste nuances are lost, as compared to a hit from a Titanium nail, skillet, or wand.  That doesn't mean that it tastes nasty, just that I couldn't tell the differences between strains with the pen, while I can with the other three systems.

What we did note comparing the raw oleoresin extract and the Absolute Amber using a Ti skillet or nail, is that we can taste the plant waxes, and note it in the aftertaste, as well as feel its coating effects on our teeth and mouths.  It is best described as a slight birthday candle taste.

I have popped the waxes from dried winterizing filters in my mouth and chewed them, to see what they tasted like, but they pretty much have no taste, and feel like candle wax between the teeth.

As a tongue in cheek thought, I was reminded of the occasional forum poster asking if any other heavy BHO smokers are experiencing congested lungs.

Of course smoking anything is a bad thing for your lungs, not to mention the carcinogenic byproducts of pyrolysis.  If you light cannabis essential oils, you will note that it puts off a black sooty smoke, but even vaporizing oil with wax in it, may be leaving wax deposits behind in their lungs, instead of black soot.

Perhaps an argument for vaporizing absolutes, instead of raw oleoresins or concretes!

We also tested a couple of larger carts, with plastic tanks for the oil, and they worked with decarboxylated Absolute Amber, but they also had to be kept vertical to keep from leaking, so we will be concentrating our efforts around the 510 type cartridge and oil in the carboxylic acid Absolute Amber form.

Even using the 510 cartridge is not without its learning curve and problems.  It will also clog so that you can't draw through it, if you don't keep drawing though it until it cools down each time.

When it did clog, it usually eventually cleared by holding the heat button down, while simultaneously pulling a hard vacuum on the stem with our lips and tongue.  When it warmed enough, it popped free, and we released the button while continuing to draw.

Now that we have working models, we will add the vapor pen to our next vaporization test panel, as well as continue to look for the ultimate cartridge made in heaven.  Until we learn more and try out more systems, we have no opinions on who makes the best thangs!

While field testing this pen in public to gauge the reaction, in one incident an usher came to investigate the smell, though left puzzled.

That revived one of my original thoughts about public vaporizers, and that was to make one like a drinking mug with a straw that you sucked on for vapors and blew on to exhale through an activated charcoal scrubber.   Plenty of room for batteries and more discrete than even a pen vaporizer.

On the design list, but not at the top and I'm running out of hands and hours.  Bless anyone who runs with the idea and produces a viable product before we get around to building one!

Tank cart with cover removed.  Cover on and ready. 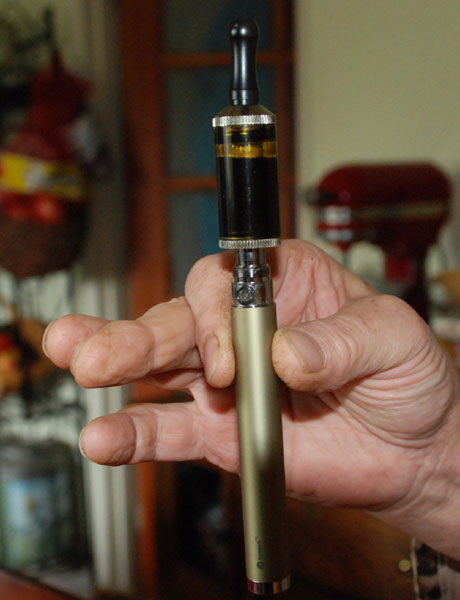 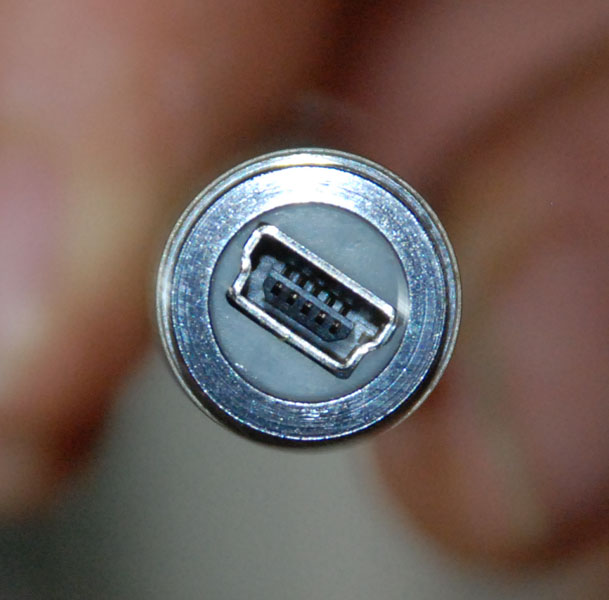 We liked this style of charger connection, which can charge from a computer, as well as my auto and home cell phone charger.

Hee, hee, hee, things just keep getting better with the evolution of the e-pen, so that now there is a panoply of electronic pen skillets, made specifically for oil.

We've been testing pens donated for that purpose, and have been favorably impressed with the progress in this arena.

To my discredit, I failed to record which student donated two of the pens for test, but here are five pens donated by Headie Designs at www.HeadieDesigns.com, which all found favor with different testers.  They also offer a discount to SPR readers, so you might check out their offerings.

One of the best parts, is that they also are now making skillets for one or two hits, which cuts through the issue with the pool becoming more phenolic tasting, as it is vaporized away.

While e-pens have yet to evolve to the point of making conventional nails and skillets obsolete, they fill a much needed slot of medicating in public, without creating the same panic and outrage that a propane torch and bong with skillet or nail would bring.

Here are the ones that we tested with impunity in public. 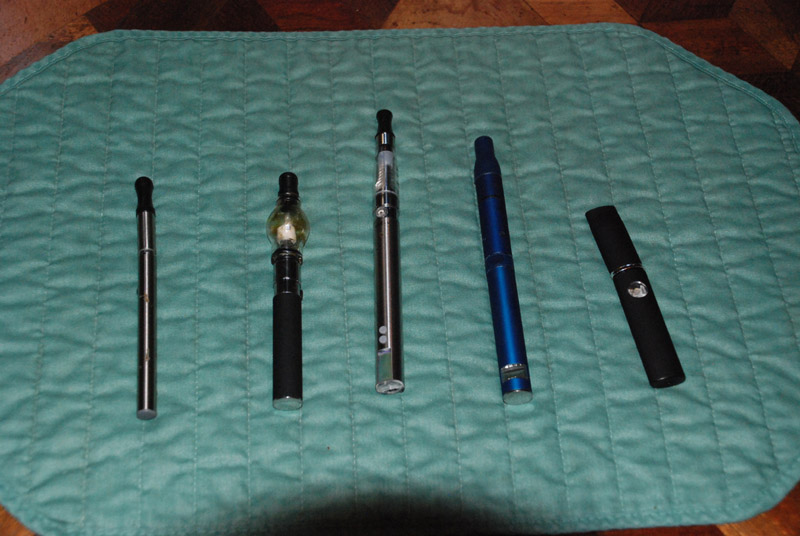