Any ya'll thinking, "hot damn, ah gots mah vacuum chamber and bodaceously big pump, so where do ah go fum heah?" Goooood question, so lets hit on a few key points.  There is more to vacuum purging and finishing than just sticking the oil in the chamber, and turning on the pump. Tip # 1 Selecting vacuum levels and pumps.  Don't waste money and cannabinoids purchasing a 2 stage vacuum pump. First lets look at what is going on when you place oil in a vacuum chamber and start raising the temperature. The boiling points of compounds are given at a specific elevation, normally sea level.  That is because the weight of the atmosphere at sea level is about 14.7 psi, 760, 000 microns or millibars, or 29.92" Hg.  The weight of that atmosphere suppresses the boiling point, and if you remove that weight, the compounds boil at lower temperatures. That is a good thing in that it allows us to cold boil away solvents with little heat, but it has its limitations, and one is that the same vacuum also changes the boiling point of the components suspended in the alcohol, that you are hoping to end up with when the alcohol is gone. For instance, here is a chart, complements of Skyhighler, demonstrating what happens when you pull a vacuum on THC.  Note that at sea level, Delta 9 THC boils around 157C/315F. Now look at what happens at -29.9196" Hg, where Delta 9 THC is boiling at  only minus -5C or 23F. Whoaaaaa!  That sorts of flies in the face of the common perception that nothing but a 2 stage vacuum pump will suffice, when most single stages will pull to below 100 microns, which is about -29.916" Hg. 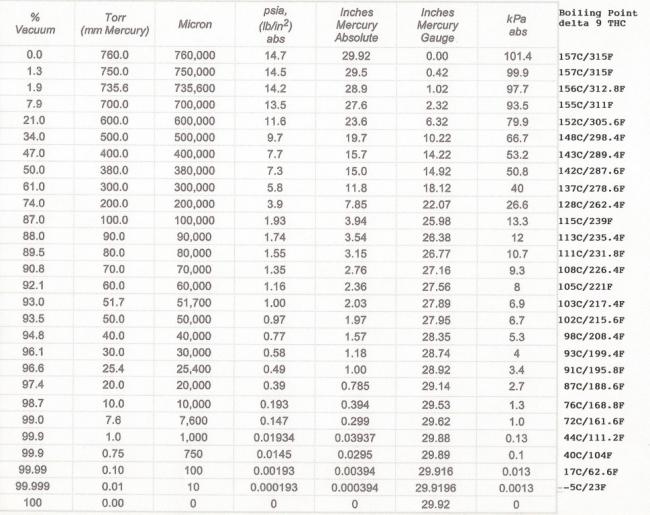 Better yet, install a cross, with the pump ball valve in the straight through port and a vacuum gauge in one of the side ports, leaving the last port for another ball valve, which will allow backfilling directly from the atmosphere.

We install a filter on this ports ball valve, so as to not vent dust into a fresh extraction.

Tip#3  The brains of the system is the compound pressure gauge, so get a quality unit and calibrate it at the start of the process, as well as periodically check it to see that it is returning to zero.

Bourdon gauges have flat partial circle shaped thin walled tube inside, that opens and closes its diameter under vacuum, and they take a little time to nestle in when new. We like a Just Better M2-250B Refrigerant Compound Gauge ourselves,  which has removable front cover, and a calibration screw that allows zero adjustment.

Tip#4   Check your pump oil for color, clarity, and level before starting the process and regularly during use, most especially during cold boiling under vacuum.

We prefer a clear, colorless pump oil, so we can see if it is contaminated by looking at it through the oil level view window.  You can also note the level, as most have an upper and lower limit indicated.

All slide vane vacuum pumps puke oil and oil vapors out the exhaust and  are noisy, so it to make a mess where you set it, unless you add a larger filter on the exhaust.

I just saw a cute conversion, that allowed spinning a Fomoco size oil filter on the exhaust, to contain the mess.  If you don't have such an arrangement, might I suggest you use a metal tray under your pump where making a mess is of concern.

If you are using the pump to cold boil, and aren't using an effective cold trap, you must regularly change your oil as the level rises beyond the safe level and begins to puke out the exhaust.

More on cold traps further down.

Tip#5    Test your vacuum pump by itself, before trying to vacuum test the complete system.

You can test your vacuum pump to see what level it will achieve inheaven, but simply attaching a refrigerant hose to the pump and the other one to a vacuum gauge.

Make sure that the cord connecting the pump is heavy enough for the pumps rated amperage and avoid using extension cords.

Don't run multiple motors on the same circuit, because of the high locked rotor amp spike during startup.

Turn on the pump and see how far it pulls down.  If it doesn't pull down to its rated capacity at your altitude, check for leaks at each of the hose connection points.

To adjust for altitude, here is a good chart, taken from: http://www.engineeringtoolbox.com/air-altitude-pressure-d_462.html 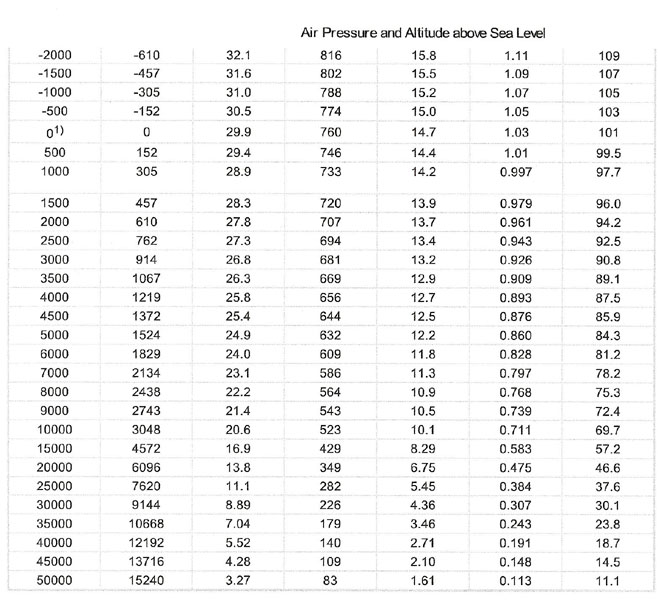 Tip#6      Vacuum test your complete system by first pumping it down as far as it will pull down, and turning off the pump isolation valve.  There should be no pressure loss after at least an hour.

Except for losses due to temperature changes, there shouldn't be any pressure losses overnight.  The key point is that the system needs to be hermetically sealed.

Tip#7    To keep the pressure of your chamber within the range that you have selected for optimum results, open the bleed valve and spill air into the pump line.

If you have both a 1/4" and a 1/2" hose connection on your pump, you can install a bleed valve on the unused one, to throttle vacuum at the pump.

Besides acting to limit how low your pump pulls the negative pressure down to, injecting dry air at that point, will help dry out the crank case vapors and slow down crankcase dilution.

Tip#8    Regularly close the ball valve to isolate the vacuum pump, and turn it off to give it a rest.

It isn't necessary to continue to run the pump, once the desired pressure is reached, but it is necessary to regularly start the pump and open the valve to burp it, so as to keep the atmosphere enriched by the cold boiling solvent removed from the chamber.

You can also valve off the chamber and introduce a dry gas through the other vacuum pump port, to act as a ballast to dry out the crankcase. Clearly you can't pull much of a vacuum venting a dry gas into the intake port, but the valved off chamber vacuum loss is tolerable for a few minutes and the pump doesn't care.

Tip#9  Use a cold trap between the vacuum chamber and the pump when cold boiling solvent to recover the solvent for reuse, before it dilutes the vacuum pump oil.

To insure that the solvent is recovered in the cold trap, and not cold boiled away there too, you must control the vacuum pressure at the cold trap, as opposed to the chamber. The lower the cold trap temperature, the more efficient.  Besides ice water,antifreeze, dry ice and alcohol, and liquid nitrogen are used in cold traps to achieve desired recovery rates. A trap with more face area to the flow, will decrease velocity and increase transfer time. A trap with the most surface area will transfer the most heat, at the same velocity and temperature.

Tip # 10   When you first pull a vacuum on a liquid, it will out gas the dissolved gasses and may boil explosively and violently, until the gasses are expelled.

To prevent making a mess, throttle the vacuum carefully, while observing the boiling action, until the gasses are expelled and the pool calms down.

Tip # 11          When cold boiling, use a glass sheet or equivalent cover over your boiling pan, so as to not blow specks of oil all over the interior surfaces of your chamber or oven.

Even though it may look like boiling has stopped, it is still sublimating, with occasional explosive bumping.

Tip # 12          Before paying good money for cheaply made vacuum chamber, consider making something of your own like the one shown at:

Watch this space for more!